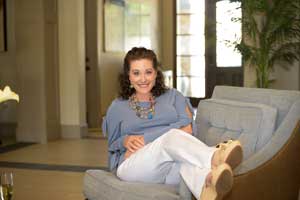 Jennifer Cote is a former U.S. Marine Corp Officer, wife, mother of three adopted children and two time cancer survivor. As a newly minted Marine Officer in 1989, she was diagnosed with cancer and had to undergo a radical surgical procedure to stop it from spreading. One year later, just three weeks after getting married, the cancer returned and the prognosis was not good. In fact, her Oncologist told her husband she had less than a five percent chance to survive the next few years. She refused to accept that diagnosis and was determined to live. After extensive research, she was accepted into a yearlong experimental cancer treatment that was successful. Jennifer was able to get on with her life and has been inspiring women with her story of courage and survival ever since. Enjoying married life and free of cancer, she embarked on the next phase of her life, becoming a business woman and entrepreneur. Jennifer followed her passion for dogs and created A Barker’s Dozen Dog Biscuit Bakery in Corpus Christi, Texas. She has also worked in management at Macy’s and Ann Taylor, then continued her passion for building businesses by co-founding and operating two real estate investment firms with her husband. New beginnings are a constant for Jennifer. Learning how to tweak her path has been a lifelong journey and after fourteen years of marital bliss she and her husband adopted three siblings (a girl and two boys) from an orphanage in Poland in 2004. She left her professional career to raise her children and learn how to teach her deaf son to communicate using cochlear implants with daily speech therapy. Since her children have learning disabilities, she eventually chose homeschooling all three at various times over the last nine years to help them succeed in life. Jennifer is a consummate advocate for living a passionate life and never accepting no as a final answer.